Several parties standing united under one roof can accomplish far more together than individually. 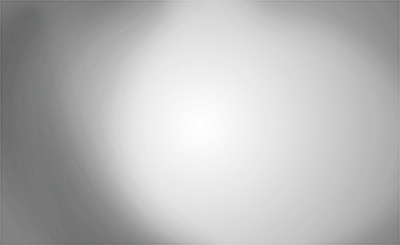 As the largest stadium in the Netherlands, we believe that it is our duty to inspire stakeholders, both as a leader in Amsterdam-Zuidoost (the Southeast District of Amsterdam) and as a best-practice example to other stadiums. The ArenA’s ambitions extend far beyond the walls of the stadium. Together with our Green Deal partners, we inspire our visitors and organizations in the region to make sustainable choices.

United under the roof of the ArenA, numerous organizations do their work. The ArenA is committed to rallying all of these organizations behind the cause of their sustainability ambitions. A case in point is the way we save energy in kiosks used by multiple caterers. Sharing our approach to sustainability through various channels, we inspire other stakeholders as well. Together with several event venues, we encourage visitors to use public transport.

This joint approach has led to a slight decrease in car use, while the number of organized bus tours to the stadium has increased a little. The solar panel roof – funded by the Amsterdam Climate and Energy Fund – shows that it is possible to make great progress in partnership with stakeholders.

No visitors? No wasted energy!

The Amsterdam ArenA has 52 kiosks where visitors can enjoy drinks and light refreshments. On non-event days, the stalls are closed. However, many appliances, including refrigerators, cash registers and advertising screens, used to be left on standby on those days. This past year, we’ve explored opportunities to switch off as many appliances as possible.

‘To gain insight into how much energy we could save, and raise awareness, we used the winter stop – the time of year when we unplug as many appliances as we can – to monitor the rest of our power consumption. The resulting “Public Catering Power Consumption Analysis” will contribute significantly to further improving the energy efficiency of the kiosks,’ says Josine Rienks of the ArenA.

Go to this kiosk to view the energy efficiency opportunities.

Not every refrigerator can be turned off when the kiosk is closed. It may contain perishables, for instance. ‘That is why we decided to first identify which refrigerators can and cannot be turned off outside of events. The next step is to find out how we can use these fridges more efficiently – some will become redundant, perhaps – and save energy all the same. In addition, as far back as 2006, we installed a beer cellar system, and since 2010 we’ve used a central post-mix soft drinks dispenser. This lets us cool soft drinks in a central location, saving lots of energy.’

The cash register system is the responsibility of the ArenA, and every kiosk uses the same system. Although switching cash registers on and off does save energy, it makes them vulnerable to defects, so they may need to be replaced sooner. ‘In this case, short-term savings may lead to long-term losses. This consideration is obviously relevant to our sustainability policy.’

The displays in the kiosks are largely energy-efficient LED screens. Switching them off on non-event days yields energy savings. ‘This is a typical example of breaking habits. The screens used to be on most of the time, even if no one was really watching or was even aware of them. The first step in saving energy is to become aware of unnecessary power consumption.’

Preventing unnecessary electricity consumption on non-event days can yield annual energy savings, as the analysis shows. ‘The Amsterdam ArenA can achieve these savings only in collaboration with the caterers. So fostering a good partnership with the caterers is vital for us.’

The study explored possible savings by more efficient appliances. ‘Several of our appliances date back to 1996, when the ArenA first opened. In those days, there was no energy label, so replacing these systems by new, grade A-rated appliances will certainly help to save energy.’ 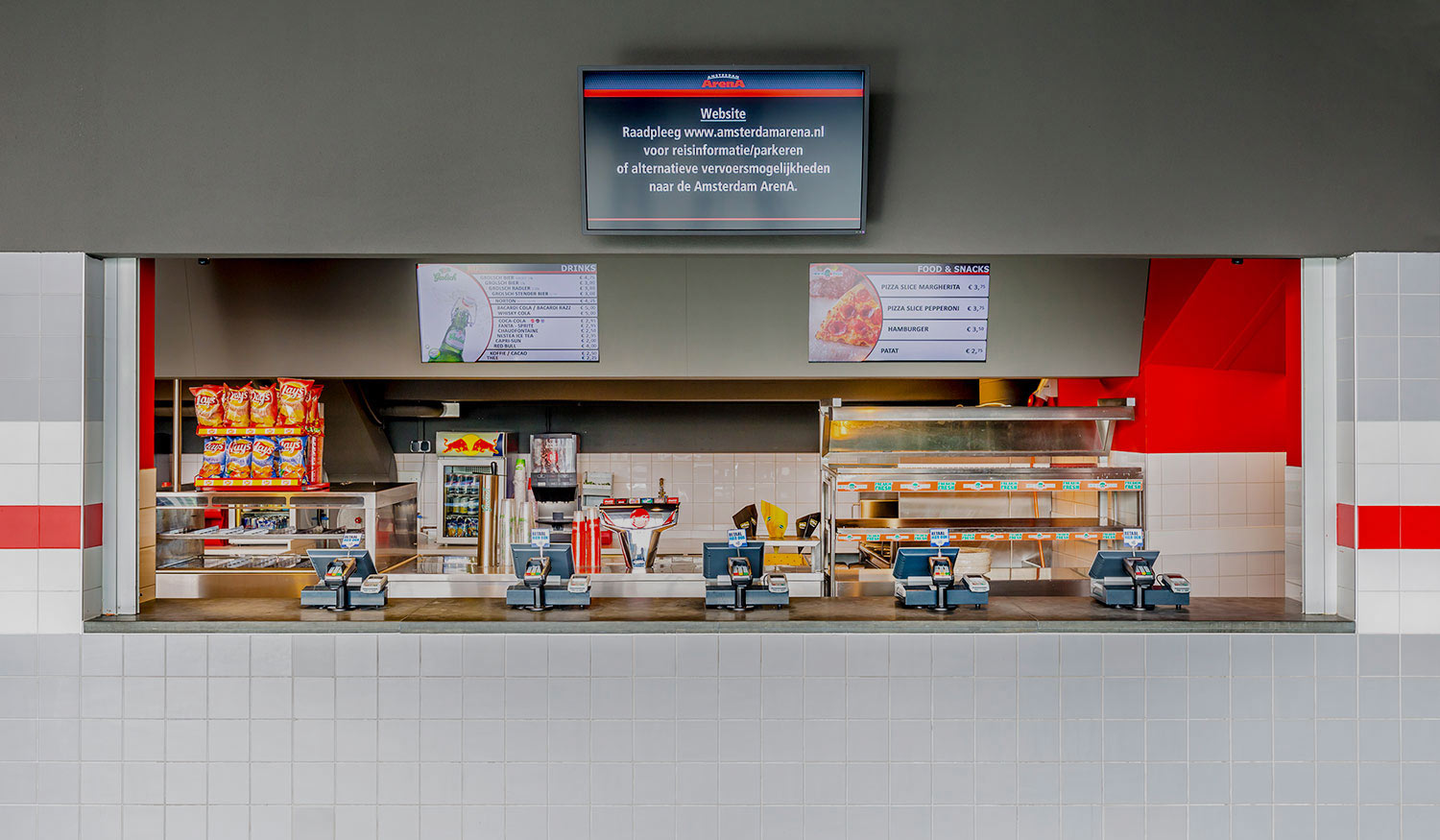 Exploiting every opportunity to save energy

Annually, the Amsterdam ArenA accommodates some 40 large events. The collective annual electricity consumption of 52 permanent kiosks is about 900,000 kWh. Wherever possible, we turn appliances off, but many systems cannot be switched off without the risk of serious problems arising, and when many events happen in rapid succession, it is just impractical to switch them off. Switching off appliances on non-event days helps us gain significant savings.

The topic of sustainability stirs up a lot of debate, but what it really needs is action. Only concrete action will make a difference. The Amsterdam ArenA fronts up to this challenge with the Green Deal partners: the stakeholders and suppliers. Their efforts and commitment are a precondition to achieving the Amsterdam ArenA’s sustainability ambitions. At the same time, the stadium serves as a best-practice example for the Green Deal partners.

Henk van Raan of Amsterdam ArenA says, ‘Several Green Deal partners readily embraced the opportunity to show their customers, associates and stakeholders that sustainability in and around the stadium is concretely embedded in the policy and structure, and that they contribute to this structure. So we’ve given them the chance to take their customers and stakeholders on a guided tour round some of the tangible successes of the stadium.’

Nuon, for instance, takes clients, consumers and employees around to show them how the ArenA enhances sustainability by using district heating and cooling as well as wind and solar energy. Engineering contractor and preferred supplier BAM shows the upgraded systems and building management system that enables efficient control of these systems. Van Raan explains, ‘The effect is astonishing. Once people get an inside view, we immediately see the domino effect. Seeing with your own eyes how sustainability is concretely embedded in operations is extremely inspiring. And for the Green Deal partners, it’s an excellent opportunity to create exposure for their role in the process.’ 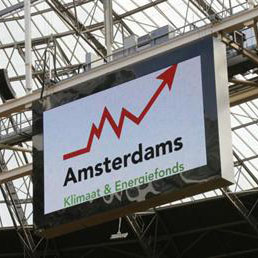 ‘This solar roof was made possible in part by AKEF’

The solar photovoltaic panels on the Amsterdam ArenA roof were largely funded by the Amsterdam Climate and Energy Fund (Dutch acronym: AKEF). This fund provided close to 1.6 million euros in funding for the project, equalling approximately 95% of the total expense. ‘The ArenA was a dream client for us. They’re ambitious and have the courage and drive to pursue real sustainability,’ says Portfolio Manager Michel Hendriks.

AKEF’s objective is to enhance the sustainability of Amsterdam. ‘It’s a major challenge as the climate issue presents significant difficulties. That’s why we were so glad to learn that the ArenA wanted to install solar panels, especially because of the excellent risk-return ratio of the project. A pilot project like this one makes a positive contribution to the climate debate.’

At AKEF, Hendriks was in charge of the photovoltaic panels’ business case. ‘The ArenA is very ambitious, which is why it was a pleasure to work with them. I think that if not for us, they wouldn’t have covered the entire roof. We convinced them that if you’re going to go up on the roof anyway, you might as well go the whole mile and do it properly. You have to install all the connections and run up the project costs anyway. A lesser yield on the north side is amply compensated for by the efficiency gains of turning the whole thing into a single project. It was great when they showed the courage to push through.’

According to Hendriks, the solar panels on top of the Amsterdam ArenA are a beautiful showpiece for the city of Amsterdam. ‘The ArenA gets lots of good feedback from all over the world. This appreciation also reflects well on the city. Indirectly, it conveys the message that Amsterdam is committed to sustainability.’ The solar panel roof of the ArenA was one reason the Amsterdam sustainability fund won the Climate Leadership Award in New York City.

Despite the number of panels – 4,178 in all – funding the solar roof is not one of the AKEF’s largest projects. Hendriks declares, ‘The fact that this involves such a well-known building in the Netherlands makes it a real prestige project for us.’ Follow-up projects to fund solar panels have already been presented to AKEF. ‘We’re about to fund a leasing company that offers solar panels under a lease construction. We will also provide solar panels for several of the most prominent roofs in Amsterdam. Of course, somebody has to lead the way, and the ArenA took on this role like a true pioneer.’ 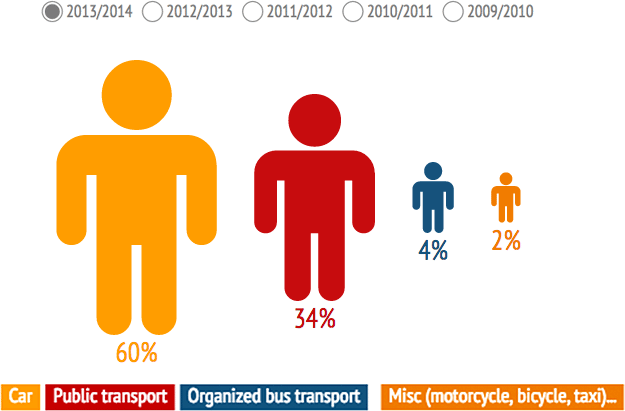 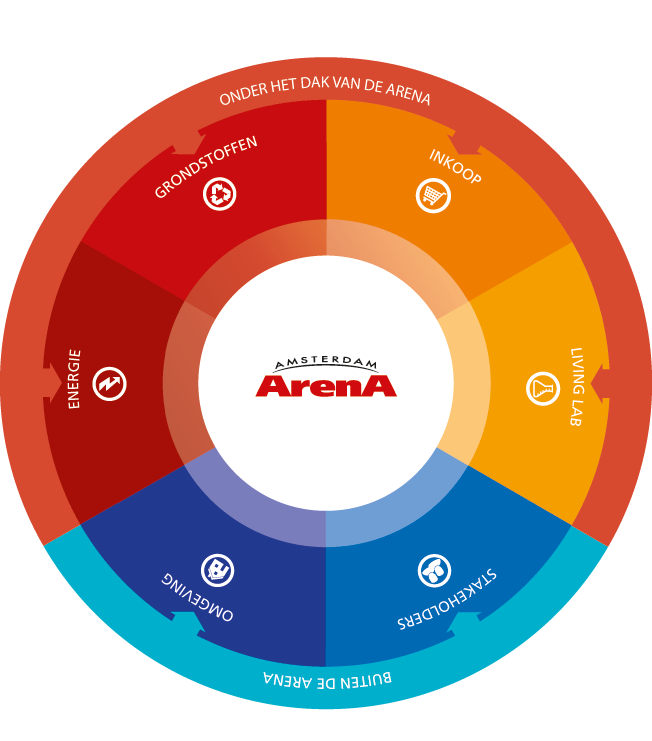 This sustainability report provides insight into the performance of the Amsterdam ArenA in the past business year and offers a preview of this year’s activities.

Full of energy shows the steps we are taking that will contribute to the sustainability of the largest stadium in the Netherlands. We are addressing six themes: energy, natural resources, purchasing, Living Lab, stakeholders and impact on the environment.

In the lead up to 2015, when we wanted to achieve net climate neutrality in our stadium, we took great strides. We are full of energy – in every sense of the word – now that the ArenA has nearly 4,200 solar panels. We procure the rest of our energy from Dutch wind.

This report shows how we are using our energy to enhance the sustainability performance of Amsterdam ArenA and to inspire the community around us to embrace the notion of ‘Naturally Sustainable’.